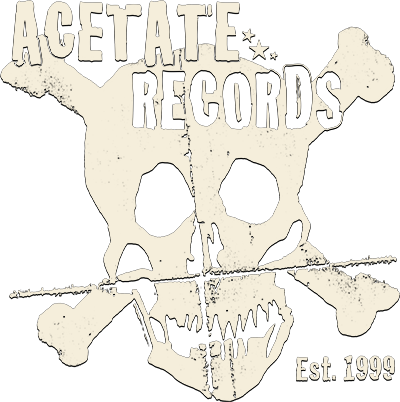 Vinyl orders include digital download card plus 2 bonus Supersuckers stickers while they last!

Looking for “Suck It.” on vinyl?

“Suck It.” is also available through Acetate Records in limited edition white or orange vinyl.

“We’ve finally become the band that we’ve always threatened to be,” says singer-bassist Eddie Spaghetti, calling, as ever, from the road. With the Supersucker odometer clicking on three decades this very year, the self-proclaimed Greatest Rock n’ Roll Band in the World is marking the occasion with a loud, resounding Suck It. Off the blocks, this 12th studio album from the band showcases a ruthless, get-it-done trio that sounds rebuilt from Motorhead parts, with a singer-bassist transmuting Lemmy’s mojo to rasp “You said to grab it / Just hook or stab it / And now I gotta have it – All of the time.”

“Once we tapped into that vibe, we really ran with it,” Eddie says of All the Time, which opens an album he and core ‘Suckers Marty Chandler (guitar) and Chris Von Streicher (drums) recorded early this year at Bismeaux Studio in Austin, TX, cutting all ten tracks in four days. “And it sounds great,” says Eddie. “There’s not a lick I wish we could have back.”

One upside to putting 30 years of work in: You get better. One downside: Few around you do. The History of Rock n’ Roll begins by lamenting a key knowledge gap among youngsters: “The difference between what sucks and what’s good” – going on to illustrate the latter with an exuberant chorus: “Like Rocket From The Crypt / And the New Bomb Turks / Let’s hear it for the Hangmen / Yeah they know how it works…” The list goes on: “How ’bout Zen Guerrilla man / They were fucking killer / And I am just amazed / Every time I see the Bell Rays.” In the tradition of “Dancing in the Streets” or “Land of 1,000 Dances,” the rhyming list song flips a crank’s tirade into a roll call of fallen heroes: “Don’t forget Danko and the Didjits / And the motherfucking Dwarves man / Yeah the Dwarves!” Eddie Spaghetti says it’s all from the heart. “I had the line in my head for a long time – ‘a footnote to an anecdote in the history of Rock n’ Roll,'” he recalls. “I’m happy it came off snarky and crotchety but at the same time, celebratory about all these great bands that I really love, wish everybody else loved, and get bent out of shape that they don’t.”

By rights, Eddie Spaghetti should be way more than bent out of shape. Three years ago, he packed his wife Jessica, their sons Quattro and Zeke, and daughter Elvis into an SUV pulling a 29-foot Argosy Airstream, setting out from Seattle to spend a year as a family on the road – a year that was ended eight days later by a patch of black ice in Oklahoma. “That turned everything upside down,” Eddie says of the crash, which was swiftly followed by a diagnosis of throat cancer and put the uninsured sometime country singer on a blue-collar trajectory from trailer to ICU room in just under six months. With his family living out of a minivan, Eddie got treated at City of Hope in Los Angeles, spending four days intubated and another six months fed by a tube before clawing his way back to Rock n’ Roll. “I’m back, for sure,” he says now. “It was a rough one though.”

Since this is the first batch of Supersuckers released since then, some come from genuine darkness. “Everything happens for a reason” begins the track Dead Inside. “What a stupid thing to say.” Four-on-the-floor cowbell and singsong chorus turn this telegram from the abyss into what Eddie rightly calls “a pop song. Back when bands used to have hits, this one could totally be a hit.” The Worst Thing Ever describes the bottom in these same straight-shooting terms, the kind you hear throughout the Supersuckers oeuvre-giddily trashy paeans to hooch, Satan, or deviant sex in offhandedly-witty light verse.

This has been more or less their métier since the group of high school buddies from Tucson first moved to Seattle in 1990, signing with Sub Pop and becoming grunge’s sole country-music dabblers, going so far as to back up Willie Nelson on the Tonight Show. On Suck It, Eddie’s forays into country are reflected solely in the bluesy nod of Cold, Wet Wind. Otherwise, their expansive hardcore-band aesthetic came through time-tested Supersucker methodology: “writing songs in hotel rooms, dirty back stages, and all the shitholes we always play.” says Eddie, whose fleet pen and nimble wit aren’t to be overlooked—the gifts of a NSFW James Thurber or an inhalant-abusing Dorothy Parker.

“If somebody is a carpenter for 30 years, they’re gonna be a fucking good carpenter, you know?” says Eddie. “So it shouldn’t be such a surprise that a band just gets better over time and I really genuinely believe that we have,” he says. And near-death experiences aside, Eddie says “It’s really sort of a miracle. I mean, who does anything for 30 years anymore?” On this summer’s 30th-anniversary tour, the band will play songs from Suck It, some country faves, and two of their Sub Pop records in its entirety.

As a whole, Suck It brings to mind that old friend who’s awesome to hang out with even if his life is in the shitter. “I tend to do my best work when I’m feeling good,” Eddie says. “I don’t tend to channel dark stuff into my Rock n’ Roll, but it makes for a more interesting record. I’ve come to realize what we do is not for everyone, but I still feel like we have hit songs. This one sounds like it’s coming from dudes in their 50s who’ve been doing it for a long time and have this stupid hope that someday somebody will hear our song and make it popular like it oughta be. Because that is the truth.”